Where is Lake Fork? 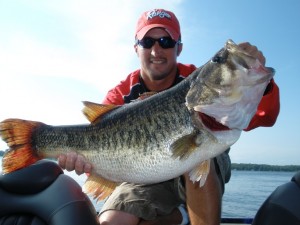 All the others are the same as statewide. 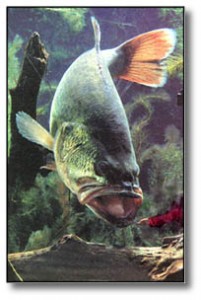 Comments: From the start, this was textbook fisheries management, including initial stocking before the lake filled, leaving most of the standing timber and filling in stages. Then, the fish were protected from over-harvest by a minimum length limit that became a "slot limit," to help make Fork the premiere trophy bass lake in Texas, perhaps in the nation. It has also been one of the top crappie and sunfish lakes.

Largemouth bass are the most popular sportfish in this reservoir. A combination of restrictive harvest regulations, stocking of Florida strain largemouth bass, and good habitat has contributed to Lake Fork's development as one of the country's premier trophy bass lakes. More than 65% of the Texas Top 50 largest bass (including the current state record) and more than half of those entered in the Budweiser ShareLunker Program, were caught from Lake Fork. Crappie fishing is generally good, especially in standing timber and under the lake's numerous bridges. Channel catfish provide an excellent sport fishery, though this remains a well-kept secret. Sunfish, primarily bluegill, offer additional angling opportunities during spring and summer.

Flooded timber is found throughout Lake Fork and provides excellent fish habitat. Although access through the reservoir is provided by numerous buoyed boat lanes, submerged timber represents a substantial hazard, so care should be exercised while boating in all areas. Areas containing hydrilla, boathouse, and docks, and lake points have historically provided some of the best fishing for largemouth bass.

Largemouth bass anglers are most successful on this reservoir during the spring, fall, and winter months. Spinnerbaits, plastic worms and lizards, jigs and jerk baits are all popular baits during peak fishing in the spring (mid-February to April) when fishing is concentrated along the shoreline for spawning fish. Night time fishing during the hot summer months can be very productive and a good way to beat the Texas heat. At this time, plastic worms, spinnerbaits, crankbaits, and topwaters are often used. During late summer and early fall, when fish are schooling, crankbaits and topwater lures can be very effective. In winter jigging spoons, jigs and crankbaits are most productive.

Crappie anglers concentrate their efforts in deep water near the dam during the winter months. In late spring and early fall, most angler fish for crappie under the bridges (Highway 154, Highway 515, CR 2946 and CR 514). Live minnows and crappie jigs are among the most popular baits used. The catfish population is dominated by channel catfish, but also includes flathead cats. Stink bait and cut bait work well for channel cats, while live bait is preferred for flatheads. Anglers occasionally catch large blue catfish.

Sunfish such as bluegill and redear can be caught in early summer, in shallow water, using crickets, earthworms, and small spinners. During the remainder of the year, they can be caught using the same baits around piers, boathouse, and submerged humps.

Texas Parks and Wildlife Department, 4200 Smith School Road, Austin, TX 78744
Toll Free: (800) 792-1112, Austin: (512) 389-4800
We strive to give you the latest in Lake Fork bass fishing information. Fishing reports, bass photos, instructions for Carolina rigging, and trophy bass fishing techniques. Also, the latest fishing conditions of the lake, if you would like to see other articles or information added to this site email. James@officiallakeforktrophybass.com