NEW TO BASS FISHING OR IF YOU ARE A PRO 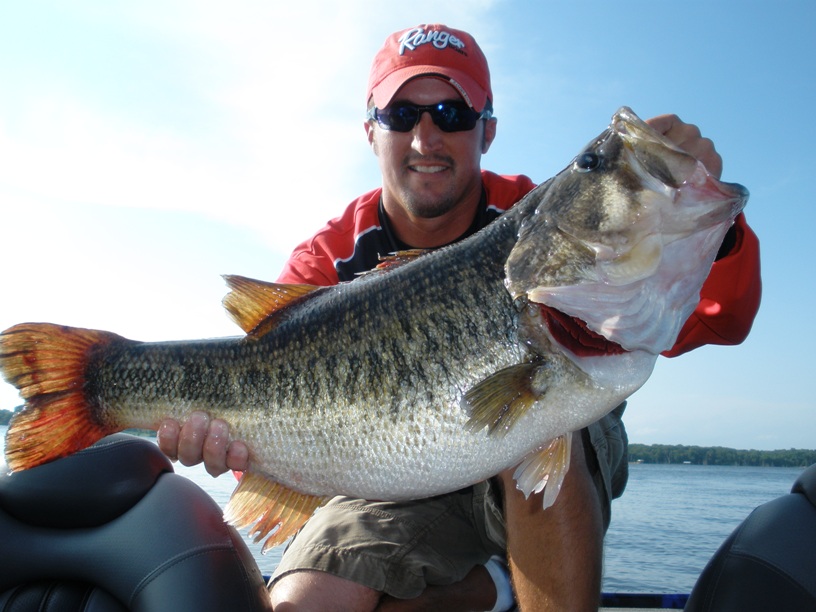 Lake Fork Trophy Bass Fishing with Pro Guide James Caldemeyer.
Here are a few good tips to remember when you go on that next bass fishing trip.

Many bites occur when a lure first lands. Control of your lure at this time is extremely important. Achieving control of the lure upon its entry into the water is accomplished while the lure is in flight. This is achieved by feathering the line so it is tight when the lure lands. The next immediate step is to raise the rod tip.

Pay attention to the weather. The most recent weather report is vital to planning a day of bass catching. Make note of the barometric pressure, wind speed and direction, temperature and any changes coming your way.

When spooling up a reel while on the water, most anglers keep the new line coming off the spool tight by running it through their hand or a wrapped towel, but be careful not to hold it too tight. The heat generated from the friction of the moving line can be enough to weaken the line. To make sure the line stays cool, you should wet your hand or the towel before you begin.

Evaluating Your Hook up Ratio

Being courteous to folks fishing. Idle when close to another angler fishing where you want to run. Give ground to an angling angler. These things will come back around your way when you are angling.

Largemouth bass grow 4 to 6 inches (10 to 15 cm) during their first year, 8 to 12 inches (20 to 30 cm) in two years, 16 inches (40 cm) in three years. They are usually green with dark blotches that form a horizontal stripe along the middle of the fish on either side. The underside ranges in color from light green to almost white. They have a nearly divided dorsal fin with the anterior portion containing nine spines and the posterior portion containing 12 to 13 soft rays. Their upper jaw reaches far beyond the rear margin of the eye.

Except for humans, adult largemouth bass are the top predators in the aquatic ecosystem. Fry feed primarily on zooplankton and insect larvae. At about two inches in length they become active predators. Adults feed almost exclusively on other fish and large invertebrates such as crayfish. Larger fish prey upon smaller bass.
In Texas spawning begins in the spring when water temperatures reach about 60°F. This could occur as early as February or as late as May, depending one where one is in the state. Males build the nests in two to eight feet of water. Largemouth bass prefer to nest in quieter, more vegetated water than other black bass, but will use any substrate besides soft mud, including submerged logs. As in Guadalupe bass, once the female has laid eggs in the nest (2,000 to 43,000) she is chased away by the male who then guards the precious eggs. The young, called fry, hatch in five to ten days. Fry remain in a group or "school" near the nest and under the male's watch for several days after hatching. Their lifespan is on average 16 years.
Immature largemouth bass may tend to congregate in schools, but adults are usually solitary. Sometimes several bass will gather in a very small area, but they do not interact. Largemouth bass hide among plants, roots or limbs to strike their prey.

Largemouth bass seek protective cover such as logs, rock ledges, vegetation, and man-made structures. They prefer clear quiet water, but will survive quite well in a variety of habitats.

Largemouth bass were originally distributed throughout most of what is now the United States east of the Rockies, including many rivers and lakes in Texas, with limited populations in southeastern Canada and northeastern Mexico. Because of its importance as a game fish, the species has been introduced into many other areas worldwide, including nearly all of Mexico and south into Central and South America.

**This information was obtained from the TPWD site (http://www.tpwd.state.tx.us) on 12/2/05. Neither the site owner nor the information, as it is presented, is endorsed by the State or any state agency. More Lake Fork Bass Fishing Tips