This Big One Didn’t Get Away

Latest ShareLunker is one of a kind, and a heart-warming story, too.

ATHENS, Texas—ShareLunker program manager David Campbell often says anglers who donate big bass to the program are the best conservationists in Texas, and that statement is backed up by what happened at Lake Fork Saturday.

Fishing guide, James Caldemeyer, was fishing with clients Brian Ketterer and Shannon Spear of Conroe, Texas, and they were looking forward to catching some big fish.

They had no idea what they were about to get into when they pulled into a small cove with nearly a dozen other boats. “With my polarized sunglasses I could see a fish swimming slowly near the surface, and it looked like she was struggling,” said Caldemeyer. “I caught her with my net. I could see she was a gigantic fish and that she was in trouble. My concern was for the welfare of the fish, so I netted her and put her into the livewell and told my clients that we needed to take her in so her air bladder could be punctured, I didn’t have a needle with me.”
Asking paying clients to give up hours of fishing time on Lake Fork during the peak lunker season in March might seem like a risky thing to do, but Ketterer and Spear shared Caldemeyer’s concern for the fish. “They couldn’t have been happier if they had caught her,” Caldemeyer said. “They were just thrilled to be part of the experience of helping this big fish.”

Caldemeyer immediately called Cameron Burnett at Lake Fork Marina, an official ShareLunker holding station, and told him they were on their way in with a fish that tipped his scale at 14.5 pounds. Burnett contacted David Campbell, and when the fish arrived, Burnett met Caldemeyer at the ramp with a bag to transport the fish to a holding tank. Burnett is experienced at “fizzing” bass or puncturing the air bladder to release air so the fish is able to submerge and swim upright.

“He let a lot of air out of her,” Caldemeyer said. “She started to get upright and floated to the top a couple of times but swam back down. We monitored her until David Campbell got there.” The certified scale at the marina weighed the fish in at 14.68 pounds.

Campbell, of course, assumed that the fish had been caught by hook and line and asked, “Who’s the lucky angler?”
“We all are,” Caldemeyer replied. “There was a big crowd around, so I took David aside and told him what had happened. I could have said I had caught it, but my ethics would not let me say that. My concern was for the fish and its welfare, not for being able to say I’d caught it. I was just trying to do the right thing.”
After contacting Texas Parks and Wildlife Department game wardens, who had no objections, Campbell accepted the fish into the ShareLunker program. “James Caldemeyer saved the life of this fish,” Campbell said. “It looks very healthy.”

“If genetic testing shows the fish to be a pure Florida largemouth bass, it will be used in our selective breeding program,” said Allen Forshage, director of the Texas Freshwater Fisheries Center. This on-going program stocks ShareLunker offspring into public waters in an attempt to increase the size and number of trophy bass caught in Texas. “We’ve all heard stories about the big one that got away. This is the big one that didn’t.”

As for Caldemeyer and his clients, after the big fish, now ShareLunker No. 465, was safely on its way to Athens, they resumed their fishing trip. The biggest fish of the day weighed about four pounds, but no one complained. “We were on Cloud Nine all day because of the way the morning started,” Caldemeyer said. 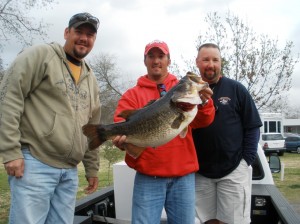 By David Rose Rarely do I judge a fish by a picture. I’ve seen some truly enormous proportions look average-sized after the shutter snaps, as well a few modest fish looking massive. So, I just had to delve.

In short, what I found out after nine hours of e-mails, private messaging on Facebook and phone calls was that it was all a prank pulled by Joshua Hand, a young man from Argo, Alabama. And by the way, that’s not even Hand in the photo. It’s actually a photo of fishing guide James Caldemeyer and a big bass about 10 pounds lighter than 24, out of Lake Fork, Texas that hand-pulled from the internet. Hand went as far as to post it as his profile photo on Facebook.

What got the hoax moving was a short airing on the WBRC Fox 6’s Monday evening news out of Birmingham, Alabama. “During slow news days we ask our viewers to send us photos of their fishing and hunting trophies, and right away the photo and claim from Hand was e-mailed to us,” said Fox 6 employee Brian Pope. Pope admits he and other staff members that first saw the photo are not avid anglers; they knew it was a big fish, but then again so are others like big catfish and gar that often are e-mailed to them. They didn’t realize a 24-pound largemouth would be a world record. And so it was aired.

Since Wednesday morning, after Hand accepted my friend request on Facebook, I discovered the motivation behind his misleading photo via a posting on his wall: “That prank was for you Ryan Dunn.....R.I.P.” (In case you didn’t hear, Dunn, one of the stars of the MTV show “Jackass” and the Jackass movies, died in a fiery car crash early Monday morning.)

They say imitation is the best form of flattery, but I'm not sure this prank is Jackass-worthy.