How to Setup a Wacky Rig

Tying the Palomar This is a strong easy knot to tie!

In a never-ending quest to catch more and bigger fish, anglers have learned to embrace a multitude of baits and techniques. We've learned to flip and pitch, cast monstrous swimbaits and even rig a drop shot. And though these fishing techniques began as foreign to most of us, eventually they found their way into the bass fishing vernacular.

While most anglers have already been introduced to wacky rigging as a concept, it seems that some of the finer points of making this finesse presentation work, as well as some of the terminal tackle, haven't yet reached the masses. The wacky rig system isn't complicated, but knowing when, where and how to use it can provide you with one of the most effective fishing techniques for spawn, post-spawn, and even deep-structure fishing.

I would say first and foremost the wacky presentation is probably at its best during spawn and post-spawn when fish move up shallow. That's because the wacky system allows you to keep the bait in the strike zone longer and it creates a lot more action with the bait. Outside grass lines, pockets in reeds, docks, rock walls, wherever fish are spawning or have moved to in a post-spawn situation are great places for a wacky rigged soft plastic. Especially in the post-spawn when bass get really lethargic and they don't want to chase bait, scaling down with a wacky worm will produce strikes for you. If you can't get bit on a 10-inch Berkley PowerBait Power Worm because the fish are shallow, you can assure yourself that if you put on a Berkley PowerBait Fat Dover Crawler and just start fishing it you are going to catch fish.

The clearer the water the better the wacky system seems to work. Obviously, with dirtier water, you're going to want something bigger like a Texas rig. The wacky rig, when not fishing thick grass or trying to get it up in the middle of a tree, is more efficient than a Texas rig. 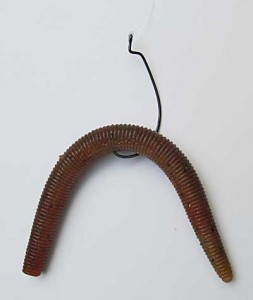 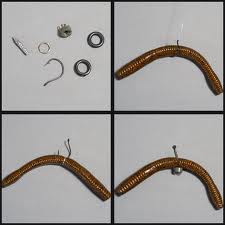 My wacky rigging equipment consists of a 7-foot spinning rod with 8- or 10-pound Berkley Trilene® 100% Fluorocarbon line. As far as hooks go, I use a wacky rig hook: a short-shank, wide-gap hook with round bends. Just stick the hook point through the egg sac, or thickest portion, of the bait. The Fat Dover Crawler is the best worm I can think of for the wacky system because it has the most movement and displaces the most water.

For weights, I use short tungsten nail weights that they insert into the nose of the baits for rigging wacky style. Without a doubt, this is the next generation for fishing open-water, deep structure fish. For spotted bass, it's probably one of the best worm techniques that you can use when they are deep. You can fish 4- to 6-inch worms wacky rigged but you put a 3/16-ounce tungsten nail weight in it and you can fish that bait really well in 20 to 30 feet of water. The fall of the bait is so different and it wants to plane and glide and you can hop it and shake it throughout the water column. Out West, these nail weights aren't hard to find, but for the rest of the country, I would suggest using the Internet if you can't find them in your region. I base the weight size on the depth of the water I want to fish. Most of the baits I use are 4-6 inches so there's not too big of a difference. The depth of the water and the speed of the fall you want will determine what size nail weight you want to use. For a super slow fall, use 1/32 ounce. To get deep, 3/16 or 1/4 ounce and heavier line will help you get the bait down there faster.
The wacky rig catches fish. It takes some experimentation and some specialized terminal tackle, but it is so effective at catching both shallow and deep fish from the spawn through fall that it is destined to be the next hot technique that makes its way to your home lake.

Tying the Palomar is easy and fast. Here are the steps:

1. Thread the line into the eye and then back out.

2. Make a simple overhand knot with the doubled line

3. Slip the loop over the hook (whateverlure, )

4. Tighten the knot by pulling the hook against the main line.

5. Trim the tag end as needed.